Many of us had childhoods that were permanently stained from numerous events of humiliation or abuse at the hands of parents, siblings, classmates, or others. Adulthood brought more disintegration of our self-esteem because of toxic, abusive relationships or other events that forced us into viewing ourselves as failures. We became saddled with shame and ridden by blame. We felt unworthy and undeserving of anything good in life. We also became dependent on the validation and/or approval of other people to try and prop up our fragile, fractured self-worth.

We found sudden comfort and immediate relief in the arms of something we could drink, swallow, smoke or snort. It was magic. It made all the pain disappear, and provided us with momentary visions of self-worth and escape from the reality of our lives. The desire for relief and escape became habitual, which then morphed into full-blown addiction. Once that happened, the heavy weight of shame and guilt, that we were carrying around from our broken childhoods and adulthood, tripled and became back-breaking.

I was abandoned at birth and abused as a child, and those events permanently scarred me. When adulthood came, I was drawn to alcohol and drugs like a moth to a light. It made the hurt stop and made me feel better about myself, but also started a pattern of isolation. Within a short period of time, I became a full-blown alcoholic and drug addict, which continued for years. I kept isolating myself more, adding to my shame and guilt. Eventually my life crashed and burned because of alcoholism and addiction and I almost lost my life to both.

Once I got into recovery, I didn’t start growing until I learned to forgive myself, which was one of the first and most important keys. I never pitied myself, but I learned to forgive and be kind and compassionate to myself. I stopped judging and condemning myself – in short, I made amends with myself. I started talking to myself the way I would encourage a best friend who was feeling down. I began to accept what and who I was, and to understand what got me to where I was. Once I understood and accepted myself, I could begin to like myself.  Just starting to take care of myself, in the most basic ways, began a journey of self-love, which does not mean some kind of narcissistic, self-absorbed, self-worship. It was simply having enough self-respect to want to care about myself.

I never allowed myself to use excuses, because making excuses for the past was just making excuses for the future. I also didn’t play the blame game, because assigning blame just creates resentments that did nothing but eat me alive from the inside out, and did nothing to the people who I had resented in the past. But most importantly, I stopped blaming myself. I did not deserve that. What I did deserve was self-love and self-respect, just like everybody else. Without elaboration, because I never want to be disrespectful or insensitive to people who don’t share my beliefs, faith and spirituality has been a crucial piece to my recovery. There is an underlying thread that goes through avenues of faith, which is that that I am loved and I am forgiven. That allowed me to learn to love and forgive myself as well.

We cannot move forward and upward if we’re still carrying around the heavy baggage and life-sucking weight of shame and guilt. It’s hard to grow if we’ve put ourselves into life without parole in the prison of blaming and shaming ourselves and fear about what other people think of us. Why should we blame ourselves for not knowing what we didn’t know before we learned it? Why worry about whether someone approves of us or not? We can be proud that we are growing and improving because the majority of the world will never be anything better than their inherited genes, inherent personality traits, childhood and adulthood experiences. But those of us in recovery rise above these things and become better people than we have ever been!

We did the best we were able to do, with the hand we were dealt, and with what we did not know at the time. Instead of reviewing our past with regret and shame, we can be proud of how much we’ve battled through and survived. All of us, who have fought through addiction to alcohol/drugs, deserve to have good things happen to us in our lives. We all deserve these good things because we are resolved resilient, courageous and we can respect and love ourselves for it. 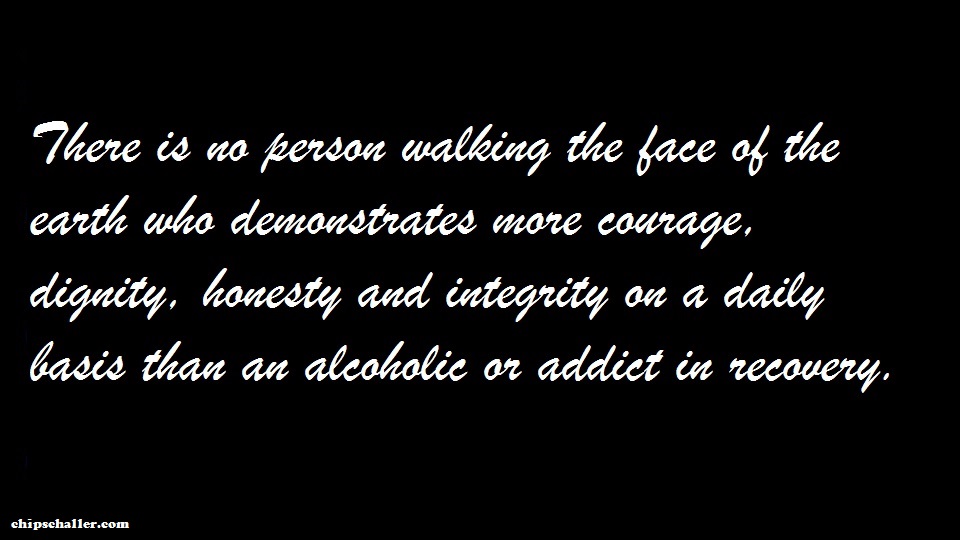 I live in Waukesha, Wisconsin where I'm married and have one step-daughter. I graduated from Valparaiso University and had a successful career where I eventually became an executive officer of a bank. But throughout that entire time, I suffered from mental illness (CPTSD), alcoholism and drug addiction. I was one of the fortunate ones who survived and recovered, so my new career is helping, supporting and encouraging other people who suffer from these same things. I do regular guest speaking to area hospital PHP & IOP groups, mental health facilities, police departments as part of their Crisis Intervention Programs, family peer groups, and others. This has taken me to new places, meeting amazing people in recovery, who have more courage, strength, resilience and resolve than anyone I have encountered in my life, and who are my true inspiration. View all posts by Chip Schaller

Name and Email is optional, NOT required to leave a comment Cancel reply